By Alex Grant / 3 years ago / Road Tests / No Comments

With only a handful of electric vans available, the Nissan e-NV200 has mostly been talked about for its cargo-carrying ability, and potential to offer greener urban deliveries. But that’s overshadowed its main USP; the seven-seat, fully-electric MPV version, which is now available with the same, larger-capacity battery as the new Nissan Leaf. 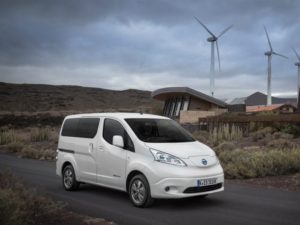 Taxi fleets have already switched onto the potential for this; the e-NV200 Evalia is well suited to short trips, returning to base for a 50kW rapid charge before going out on more jobs. But there are countless families for whom this could now work as an alternative to the (usually diesel-heavy) compact MPV, cutting fuel costs while also contributing to cleaner air around schools. The only other seven-seat electric cars have a Tesla badge, with the size and price tag that comes with it.

For inner-city use, it’s brilliant. The e-NV200 is tall but occupies a similar footprint to a C-segment hatchback, though importantly most of that is the cabin. So there are three rows of seats, and all except the driver’s fold or tip forward to adapt to long loads, bulky items such as buggies or bikes, or the entire family. Quick steering and the old Leaf’s 109bhp motor and single-speed transmission mean it’s as agile as a small car, as comfortable to drive as an automatic, and practically silent too.

Nissan hadn’t upgraded the e-NV200 battery since it launched, so the step up in range is significant here. The new battery has a 40kWh capacity, up from the 24kWh early Leaf pack used in its predecessor. For comparison, that’s enough to offer a range of 174 miles under NEDC testing, though Nissan says the 125-mile extra-urban and 188-mile figures derived under the new WLTP cycle are more realistic. In traffic, that’s a long time at the wheel.

The Evalia – which, unlike the Combi, gets a full passenger car interior trim – is offered in two versions at the top-spec Tekna grade. Both include 50kW rapid charging, restoring 80% of the range in 40-60 minutes, and the Chademo connector enables bi-directional charging too. The big difference in terms of spec is the Tekna Rapid Plus gets two-times faster AC charging, halving a full charge to 7.5 hours. Nissan also offers a battery lease option for the e-NV200, starting at £73.20 per month.

The problems is, Nissan hasn’t done much to mask its origins as a commercial vehicle, so that clever EV technology feels a bit juxtaposed in a car that otherwise feels a bit crude. Hard plastics, porthole side windows and exposed seat folding mechanisms, with welds and bolts on show, are out of step with car-derived MPVs, while the third-row seats fold up and out to the sides of the boot, secured by straps. It feels more like an aftermarket conversion than a factory build.

It’s also not particularly comfortable. The upright driving position isn’t helped by limited adjustability in the steering column, and rough surfaces tend to make the entire body pitch violently back and forth – especially at high speed. It feels unnervingly light in crosswinds, too, and the steering is too sensitive around dead-centre for relaxed motorway driving. Most rival MPVs also get better, more comfortable rear seats.

All of which is frustrating. On paper, the e-NV200 is space-efficient and well suited to moving families around town, helped by sliding doors for tight car parks and a large boot with a low load floor. But it feels too much like a converted van to lure drivers out of a segment which offers few alternatives to petrol or diesel.

The e-NV200 Evalia feels like the right sort of car for inner-city familes; a spacious MPV without the noise or exhaust emissions of its nearest rivals. But it feels like a taxi, a converted van, and while there’s certainly a place for it within fleet, that rough-around-the-edges driving experience likely to limit its appeal to company car drivers.