A new project that will bring a high-power electric vehicle charging network from late 2018 is now underway. 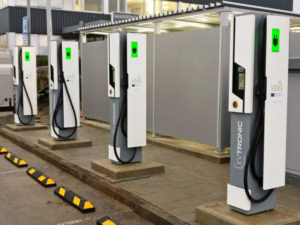 Multiple rapid charge point installations like the one shown are expected to popup across Europe, aiding electric vehicle adoption

Stations will have a capacity of between 150kW and 350kW and will be located along motorways and expressways.

The project will have a budget of €6.9m. of which half will come from the European Commission’s Connecting Europe Facility (CEF) for Transport programme.

Meanwhile the manufacturer-backed pan-European Ionity network is planning to roll out 400 sites on major routes by 2020 while utility company Eon is to install a network of 10,000 charging points across Europe.