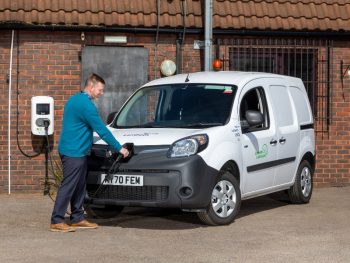 The vans are the first to be purchased by the council and will join the landscape divisions fleet, used by housing supervisors and mobile fitters visiting sites across the council’s 10.36 square mile area. They join a Renault Zoe electric hatchback, which was deployed for use by the tree inspector last year.

Lambeth was identified as an Air Quality Management Area (AQMA) in 2007, because of high levels of nitrogen dioxide and particulate matter in the atmosphere. In 2017, it launched its own Air Quality Action Plan, which includes its fleet “leading by example” with its adoption of electric vehicles.

The vans replace similarly sized diesel vehicles from another manufacturer, and are a step towards the fleet becoming 30% electrified. Studies carried out beforehand showed the Kangoo E-Tech could meet drivers’ range and size requirements, while reducing fuel and servicing costs and downtime.

“For anything under 3.5t, we are now only considering electrified vehicles,” he explained. “The Kangoo E-Tech allows us to continue our focus on our local environment with no impact on our operational effectiveness. When you add in the lower running costs and the fact an electric van can be serviced in minutes, then it’s actually very hard to justify a diesel or petrol van of a similar size.”