Drivers’ ongoing love affair with SUVs is threatening the UK’s attempts to clean up the transport sector, in particular the 2050 net zero emissions target. 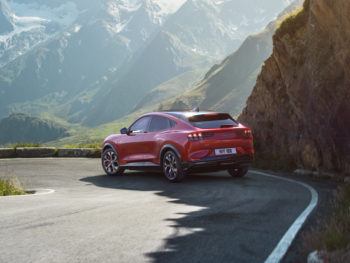 Many of the latest electric cars are also SUVs, such as the Ford Mustang Mach-E

That’s one of the findings of the UK Energy Research Centre in its 2019 annual Review of Energy Policy as it says that achieving net zero requires the phase out of fossil-fuelled vehicles, including hybrids, to be brought forward to 2030 and also calls for immediate action to counter the rapid increase in sales of larger cars, including SUVs and on a global scale.

Published today, the report highlights how the trend towards purchasing bigger cars is threatening the UK’s attempts to reduce emissions from the transport sector.

Over the past four years, there have been 1.8 million SUV sales, compared to a total of 47 thousand for battery electric vehicles (BEV). This equates to a staggering ratio of 37:1. In 2018, SUVs accounted for 21.2% of new car sales, up from 13.5% just three years earlier.

Figures indicate that SUVs emit about a quarter more CO2 than a medium-size car and nearly four times more than a medium sized battery electric vehicle. Assuming the majority of these SUVs will be on UK roads for at least a decade, the extra cumulative emissions is believed to total around 8.2 million tons of CO2. It is also worth noting that many manufacturers are looking to satisfy both the requirement for battery-electric vehicles and the SUV trend together, with cars such as the Tesla Model X, Jaguar I-Pace, Audi e-tron and Hyundai Kona Electric, amongst many others, built to capitalise on SUV appeal.

And, drivers’ passion for SUVs is also seen in the plug-in hybrid sector, where the majority of PHEVs sold were also SUVs, again consuming more energy than they need to.

In response, Professor Jillian Anable, UKERC co-director, says the UK must start to phase out the most polluting vehicles immediately, adding: “It is time to enact a strong set of regulations to transform the entire car market towards ultra low carbon rather than focusing solely on the uptake of electric vehicles.”

Dr Christian Brand, UKERC co-director, added: “There is now overwhelming consensus that achieving net-zero requires the phase out of fossil-fuelled vehicles to be brought forward to 2030 and this must include hybrids.

“At the same time government should take action to counter ‘unintended consequences’ such as the recent trend in the UK to buy larger, heavier cars such as SUVs. This trend is global so will require policy and industry action across all global markets including the US, EU and China.”

The RAC commented on the research, pointing out that drivers are being offered an increasing number of zero-emission SUV models these days as the choice of electric vehicles fast expands.

RAC spokesman Simon Williams said: “It’s important to remember that the SUV trend has been developing for around two decades, arguably really taking off in the mid-2000s, whereas the EV market is only just beginning to accelerate as battery technology improves along with the availability of public charge points. As a result there are some very strong EV sports utility vehicles on sale now including the Kia e-Niro, Hyundai Kona, Mercedes EQC and the Jaguar I-Pace. The desire among drivers to purchase SUVs is likely to continue for personal preference and lifestyle reasons so we imagine the EV market will simply mirror that.”

Previous: Comment: What the new year and the rise of the EV will mean for fleets
Next: Future Government must provide certainty on company car tax rates, says industry